This has been a great source of debate recently.  I’ve heard some pretty interesting accounts and the overall story fascinates me. So, she dominated the South African junior championships 3/4 weeks prior to the World Championships and this alerted the international authorities – who then decided to keep a close eye her/him. Then this happened…

The wife and I didn’t know about the prior ‘debate’ and both remarked that she/he was very ‘manly’.  John Inverdale then confirmed our suspicion during the post race analysis on the BBC. She smashed the final and was quickly whisked away for further ‘tests’. Someone in the office did say “how hard can it be? whip down her strides and check whether she has meat and 2 veg!”. Many are probably thinking the same but I heard a really interesting account of the ‘process’ following a BBC interview after the race.  The process is delicate.  Caster has been bought up a girl, she believes she’s a girl – why wouldn’t she?  The interviewee (an IAAF governer) remarked that this case is unlike a drug cheat – where you can single out the individual for cheating and disqualify them, taking away their medal.  The Caster situation is delicate in that DNA tests may prove she was/is a man.  The difficult task is managing the athlete during what must be the hardest time in their life. Dealing with the consequences and coming to terms with such a life changing discovery cannot be easy.

So, after a hero’s welcome when she arrived back in South Africa (where she displayed even more manly characteristics) they decided whisk her away, whack on a bit of slap and make her more ‘feminine’ for the cover of ‘YOU’ magazine. Amazing.

I’m amazed by the whole story. What are your thoughts? Man? Woman?  Either way, ‘it’s’ a bloody good runner! 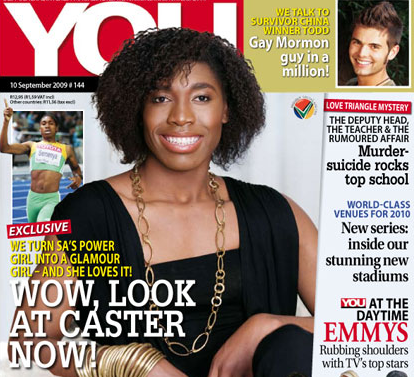